Good morning and hope you all are doing great?

Some days ago, we posted an Article on Naijahitz asking what could be the reason why Davido was not on the Beyonce‘s “Lion King” album which Wizkid, Burna Boy, Tekno and others graced.

While checking out some tweets on Twitter, a particular tweet caught my attention and I can’t help but bring it here for you all to see. 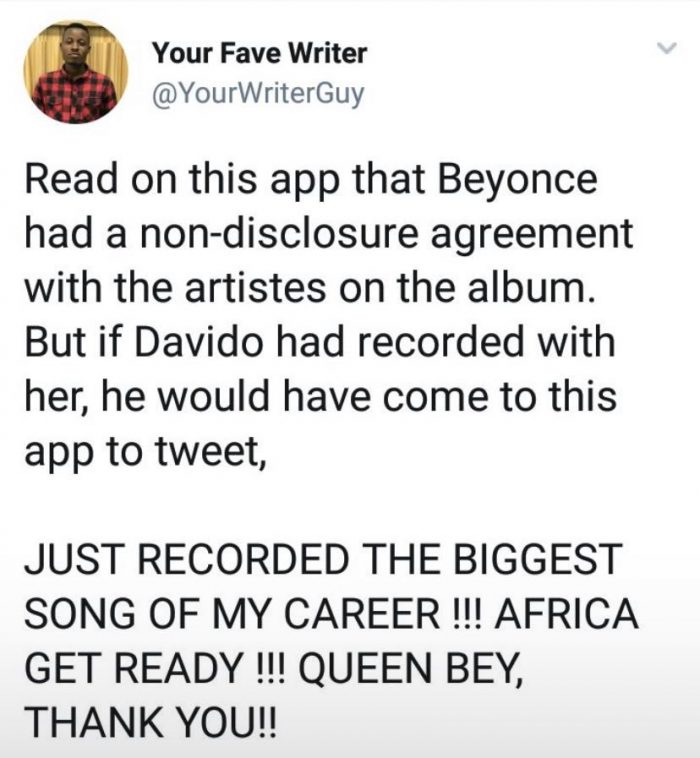 It might be true and might be false but believe me, I have a feeling this could be the reason – anything is possible oooo.

When working on a project, some Brands/Companies or Individuals do not want anyone involved in that project to disclose anything about it to third parties or share the info on Social media.

Most brand will ask you to sign this Agreement, so they can be rest assured you won’t let anyone knows about the Project. You will be sued if you go against this.

Even though I do not believe in this tweet, am having this impression that it might be 100% correct because none of the Artistes involved mentioned or hinted their fans about it.

None of them said anything at all, no one saw Nigerian Artistes on that album, we just woke up to it and the internet was on fire.

Why Davido is not on the Album

According to the tweet above, Davido won’t keep to the agreement as anxiety will make him post something about it on Social media.

I Swear, the Davido we all can do it 😂

Well, over to you guys, we want you guys to have a say on this.

Could This Be The Reason Why Davido Was Not On The Album?

Let’s hear from you all.

ABOUT US
Naijahitz is a news arm of Naijahitz Media Consults and Naijahitz TV which provides unparalleled insights into Nigerian/African affairs, news media and issues from an African perspective. We cover sub-African and international news, politics, health, Music, Fashion, Gossip, tech & science and business stories which contribute to the socio-economic development of the continent.
Contact us: adsnaijahitz@gmail.com
FOLLOW US
© Naijahitz Media Consults © 2018 - 2022. All rights reserved
Tel: 2348065508954/2348084883450
Email: adsnaijahitz@gmail.com
MORE STORIES
NAIJA NEWS

HELP! Have you seen her? This young lady is missing (Photos)

Full list of the stations NBC revoked their licenses

The reason ASUU and federal government are yet to reach resolution...