A man has shared his chat with a lady who tried to get too close to his family, after three weeks of knowing each other.

According to the story shared by postsubman, the lady had shown him “green light”, so he decided to ask her out.

However, after a short time, she started complaining about their house rent being due, and how the landlord wants to throw her family out.

Three weeks later, she was asking to meet his mother and family members, and he bluntly refused, cause according to him, it’s still very early for that.

He said the relationship began to take another turn after then and he couldn’t continue anymore.

He also shared a short chat between them to confirm that they’re no longer together.

See the chat below:- 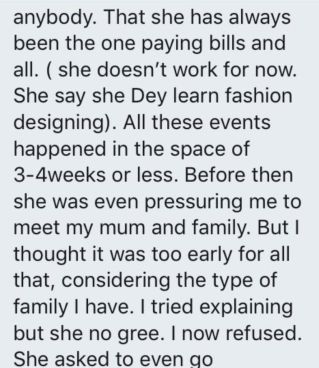 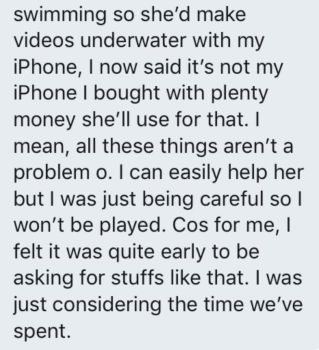 ABOUT US
Naijahitz is a news arm of Naijahitz Media Consults and Naijahitz TV which provides unparalleled insights into Nigerian/African affairs, news media and issues from an African perspective. We cover sub-African and international news, politics, health, Music, Fashion, Gossip, tech & science and business stories which contribute to the socio-economic development of the continent.
Contact us: adsnaijahitz@gmail.com
FOLLOW US
© Naijahitz Media Consults © 2018 - 2022. All rights reserved
Tel: 2348065508954/2348084883450
Email: adsnaijahitz@gmail.com
MORE STORIES
Relationship

Six Basic Reasons People Opt Out Of marriage (Must Read)

HElP! A Friend Trying To Snatch My Girlfriend – Man seeks...

Ladies, You Need To Read These Before Going into a relationship

Please Help! I Love My Boyfriend But He Doesn’t Buy Me...