In a viral video trending online, the 51-year-old rapper declared his admiration for Tems while inquiring when they would collaborate on a hit song. According to Snoop, everyone in his household listens to her, adding that they ought to have it happen as soon as possible. He said,

“So Tems, when are we going to make a record? You know I’m a fan. “Now let’s get to the shit. Let’s make a f^cking hit record girl. “You have my whole family dancing to your sh#t, I need one with you. And you can post that. Happy new year.”

Moments after Snoop Dogg reached out, Tems took to her Twitter page to boast saying you only know you’re a GOAT – a word which describes a person who has performed remarkably – when you attract other GOATs. She wrote:

“How you know you tha 🐐 is when you attract the all the 🐐’s. It don’t take too long for a GOAT to recognise another GOAT. But the sheep, they always blind af.” 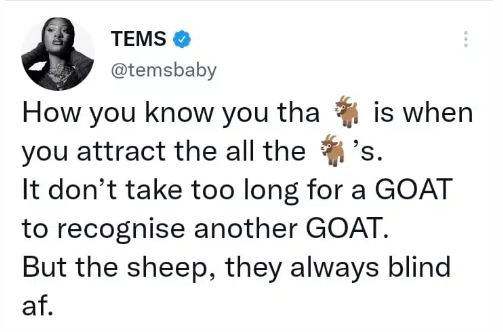 Iyanya pushes fan off stage for slapping him with money (Video)

Daddy Freeze reveals the reason he hasn’t given his mother money in years.